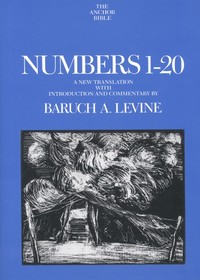 Baruch A. Levine has written a masterful study of the first half of the Book Of Numbers or the Anchor Bible Commentaries. The Book of Numbers--from the numbering or census of the people in the opening chapters--is a much-neglected part of the Torah, the five books of Moses, which constitutes the heart of Holy Scriptures for Jews, while also forming an integral part of the Bible for Christians.

The Book of Numbers is an account of the young would-be nation of Israel's wanderings in the Wilderness after the magnificent event at Sinai, where Moses speaks with God face-to-face and receives the Ten Commandments. Throughout this time of trial, the people complain, sensing the contrast between the relative security of slavery in Egypt, from which they have fled, and the precarious insecurity of freedom in the Wilderness.

Numbers is a book filled with power struggles, raising questions about who speaks for God, along with personal and communal crises of faith and rumors of revolt. Yet despite the people's blindness and rebelliousness, God remains faithful to the promises made to Israel's ancestors--Abraham, Isaac, Jacob, and now Moses--and remains at Israel's side, guiding her slowly but surely to the Promised Land. In all, Numbers describes a terrific journey of discipline and dependence upon the God who liberated the Hebrews from bondage in Egypt: a journey to strengthen Israel for the challenge of a new and wondrous land and the battles she will have to fight in order to claim and keep it.

Despite the importance of The Book of Numbers, its rich collection of stories is not easily assimilated, even by the most conscientious of readers. As such, it requires the help of an expert guide to thread one's way through this mixture of interesting episodes and anecdotes on the one hand, and the many lists, prescriptive rules, ritual regulations, and repeated admonitions on the other. Professor Levine shows us the way into this difficult and sometimes forbidding book of the Bible, and we can be confident of our guide, and secure in the knowledge that the one who led us into the thicket will lead us out again into a broad and fair land.